In addition to the rather recent discovery that I might be a writer (which sounds like it should be the brunt of a Jeff Foxworthy joke and accompanied by a list of Ten Signs You Might Be A Writer), I’ve always loved consuming films and books with a food, wine or travel bent.  As temperatures drop and Thanksgiving provides some of us a good excuse to curl up with food films to make us feel less terrible (?) about all we’ve consumed, here’s my list of top foodie flicks – what would you add? 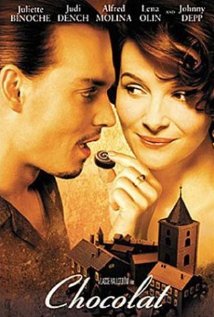 Chocolat – my all time favorite.  I watch this film at least once or twice a year, and my family loves (or pretends to love) it just as much.  From the idyllic French village setting to the lovable cast of characters and the story following a mother and daughter following the incessant push of the west wind which will not allow them to put down roots, I completely adore this film.  Food is both a stark temptation and a decadent treat, and I love the familial gathering at the end.  My Dad once informed me it was based on Babette’s Feast, and it is on my list to view soon. 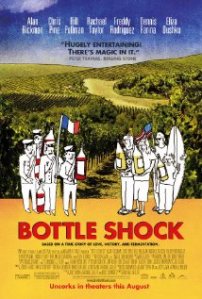 Bottle Shock – so cheesy, but so great!  First, let it be known that I’ve always been lukewarm about Sideways, that far more well-known film about the California wine scene that had everyone talking.  Bottle Shock traces the early days of the California wine industry before its footing became firm and its outputs were taken seriously.  A comical caricature of a French-based, British wine snob pits American wines against the undisputed French greats in this based-on-reality interpretation of the 1976 blind wine tasting in Paris.  It’s a must-watch, feel-good flick.

Julie and Julia – it’s predictable, but I can’t leave off this jolly film which rotates between Julia Child’s life and food education in Paris and the Manhattanite who sets out to complete every recipe in the chef’s Mastering the Art of French Cooking.  I was initially prepared to dislike Julia and put off paying any attention to her significant food world contributions for the first 30+ years of my life.  Julie and Julia changed that, and I soon devoured the book (on a flight to Paris, no less) and now find them both endearing in completely different ways.  And to Julie, I say: please return to blogging!  K thanks.

A Charlie Brown Thanksgiving – While I am fond of all the Charlie Brown movies, this one has my heart.  I love the gathering of the kids for their own Thanksgiving meal, popcorn as a legitimate contribution to the feast and a million other underlying themes that I can’t possibly dissect here in short form.  Rekindle your childhood by watching it this season.

Ratatouille – I completely love this film.  And yes, I know my foodie flick list has a not-so-underlying theme of France, but hey – at least I stick close to my themes.  This is one of our family’s favorites, and I swear that even with my non-existent (expired) sense of smell, I can still get a whiff – if only in my head – of that rich ratatouille.

Go forth and give thanks!

All film images are from (and link back to) IMDb, the internet movie database.