I can’t claim to have ever been a particularly enthusiastic maraschino cherry consumer.

They’ve really only made a few notable appearances in my life: most frequently (annually) in Mom’s famous rum cake. That recipe will never appear here, by the way; she would slaughter me. I’m honestly shocked I have a copy of it. As my Dad says, though: “Having the recipe doesn’t matter – nobody makes it like Mom!”

The other memorable experience I’ve had with maraschino cherries was at an unnamed place in the Great Smoky Mountains, where I was offered (and repeatedly accepted) them sopped in Tennessee moonshine. Off the record.

Otherwise, though, I’m not very fond of them. Something about that Red Dye No. 40 isn’t particularly appetizing. And so, I read with interest an article in the summer 2011 issue of Mary Jane’s Farm magazine about said dye affecting urban beehives in Red Hook, NY. It’s worth reading the full, well-written story by Genevieve P. Charet as well as a more thorough article in The New York Times: The Mystery of the Red Bees of Red Hook.

While I don’t think it is necessary to boycott them and I don’t tend to keep them around anyway, the articles certainly moved me toward a more focused decision to not buy maraschino cherries. Compound this with the fact that my esteemed sister is an assistant produce buyer (apples, cherries & pears) for Sam’s Club: I’m regularly reminded of the loveliness of this fruit in its prime. 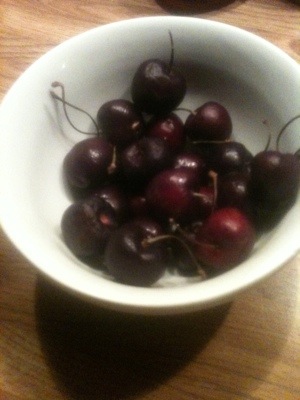 My sister and I spent many of our pivotal years in Wenatchee, Washington – an orchard Mecca for the aforementioned fruits. If you think you like cherries, try eating Bings straight from the tree in the middle of summer in the Pacific Northwest. Alternatively, if you think you like cherries, try sorting them in full winter wear in the bone-chilling warehouses of the Pacific Northwest in the height of triple-digit summer heat, as many kids in Wenatchee did. But I digress.

Take all of this background information, and imagine my delight at finding a spread in the summer 2012 issue of Mary Jane’s Farm on cherries, including a recipe for brandied cherries. 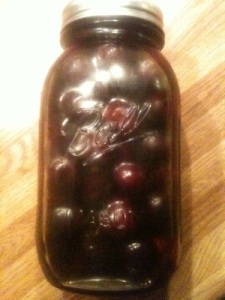 Immediately, my winter plan became clear: I do love something I can make in summer as a winter gift. So (the point of it all), this week I made my first batch. You know – a trial run, for sampling purposes. I think it will do nicely.

Per the instructions in MJF, I combined the cherries with sugar, almond extract (a bit heavy-handed) and premium brandy (also, um, a smidge heavy-handed). I recommend you grab the magazine or locate the full recipe, but let me know if you struggle. 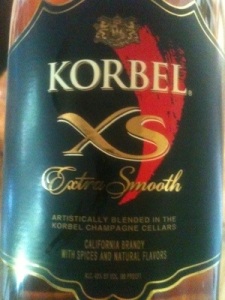 I confess to having concocted the large sample jar on Friday, and despite my best efforts at restraint, sampled it today. You WON’T be disappointed.

Spoiler: this will be a Christmas gift for some of you, so act surprised. I think they’ll be completely amazing in cocktails and atop ice cream. I’m pretty excited.  Mmmmmm. 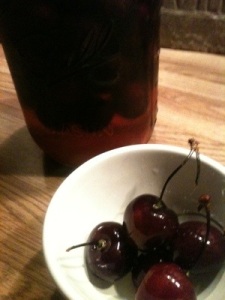