There is a tiny photo in my office in a weathered red wooden frame.

It probably seems either unimportant to most, or self-indulgent.  To me, it’s one of the most evocative pieces of my past.

Look at it, if you like, but let me try to more effectively capture it, if you are interested:

Most centrally and most eye-catching, a slender black woman with pristine skin is holding a small white infant.  That’s Thelma, and that’s me. 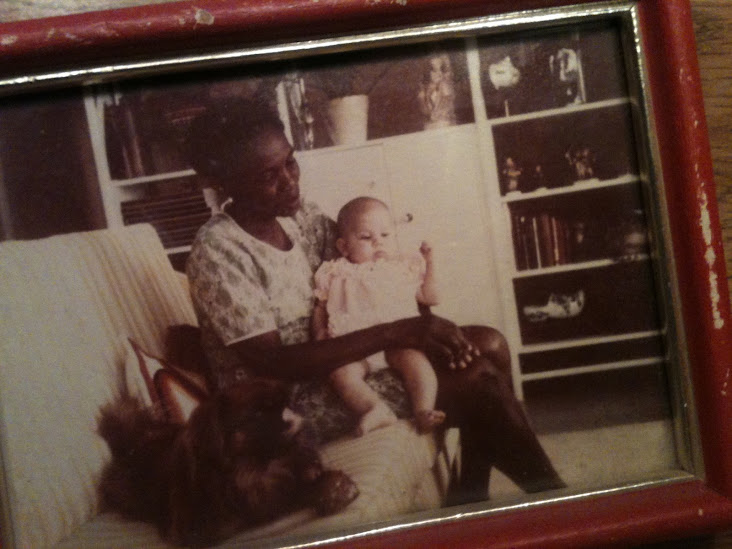 The couch is yellow and scratchy-looking.  A brown and auburn Pekinese sits near us, licking his chops and facing away as though we are infringing on his space.  We were.  His name is Gogo, and he did his best to compete with me in my early years.  I’m fairly certain he won, and at the very least… I know where he is buried in Pittsburgh.  Honestly, it looks as though he chewed on the photo frame a bit.

Between Thelma and Gogo is a pillow – also scratchy.  It’s very 1970s, with a graphic pattern stitched in burnt orange, mustard and shades of brown.  It was never very comfortable, and yet I remember it vividly… and then one day it disappeared.  I bet Mom still has it.

In the backdrop is a shelving unit, holding a number of seemingly innocuous items. including books, records, a tropical plant, a ceramic blue and white Dutch shoe, a collection of porcelain Hummel figurines and a replica of Michelangelo’s Madonna (and Child) of Bruges. Photo via Wikipedia of the Madonna of Bruges

Innocuous, indeed: the tiny photo in its entirety encapsulates my childhood, and it is one of the most sentimental things in my home.

The books are key: they surrounded me as a child, quietly placing reading and learning centrally in my life.

Records: I listened to them.  Hence, I was born before the advent of cassettes.  I would happily describe the brown and off-white record player of my youth and my favorite records to you if you found yourself with nothing left to do on this earth.  {Does anyone else know this one?  Snap dragons never snap… tiger lilies never growl…}

The tropical plant is evocative of the places of my youth – we lived in Jamaica in the British West Indies, and this particular photo was taken in the capital city of Paramaribo in Suriname (or Dutch Guiana) in South America, a country which gained its independence from the Netherlands (hence that Dutch shoe) just a handful of years prior.  My Mom is very fond of the Hummel figurines, and reading a quick and incomplete post on their history and popularity from the late 40s to early 70s solidified many of the reasons for me.

And that Madonna of Bruges replica?  My parents lived in Germany during the Vietnam war and subsequently toured much of Europe, where they acquired it.  Dad has told me dozens of times about standing close enough to touch this 1500s sculpture by Michelangelo before an attack on the Pietà in 1972 placed the treasure behind glass.  I’m sure the connection to this piece barely dawned on me some years later when I stayed in Brugges, Beligum and felt a particular affinity for it, despite years of that piece in our home.

Then there is Thelma, and for this, the words do not exist.  If you’ve ever read of patron saints or understood a deep connection of the caliber captured only by those like Zora Neale Hurston, then you may have an inkling of Thelma.  I have my patchwork of memories both absorbed and projected by the photos like this one, but of this I am certain:

There is one Christmas card from 1982 in my scrapbook, signed with many love from Thelma.  There is another, which I ran across some two decades after we lived in Suriname.  It is written with a shaky but sure hand, and it arrived in time for Christmas across two continents and easily a half dozen changed addresses through the years.  I was in college, self-assured and home in Washington state for the holidays, feeling all of the shakiness and depth that a visit home exuded at a time when a girl thinks she has figured the world out and then realizes that most of it is behind her where she tried to leave it. 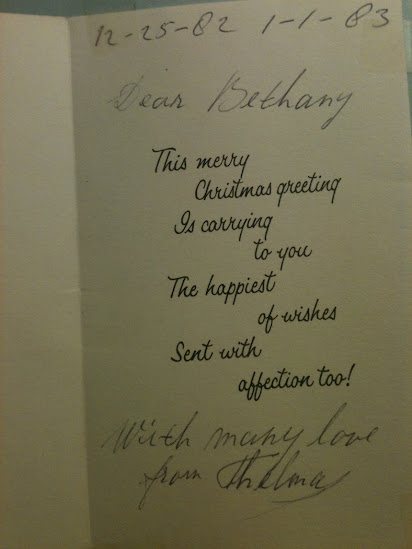 I casually flipped through the Christmas cards left, not so casually, for the exact purpose of enticing me to flip through them…. and that one stalled me.  The loopy, well-executed cursive and the shaky hand of years passing – but the unmistakeable signature of Thelma.  And for that, and so many other reasons… she and that one weathered photo hold a place of honor in my home.